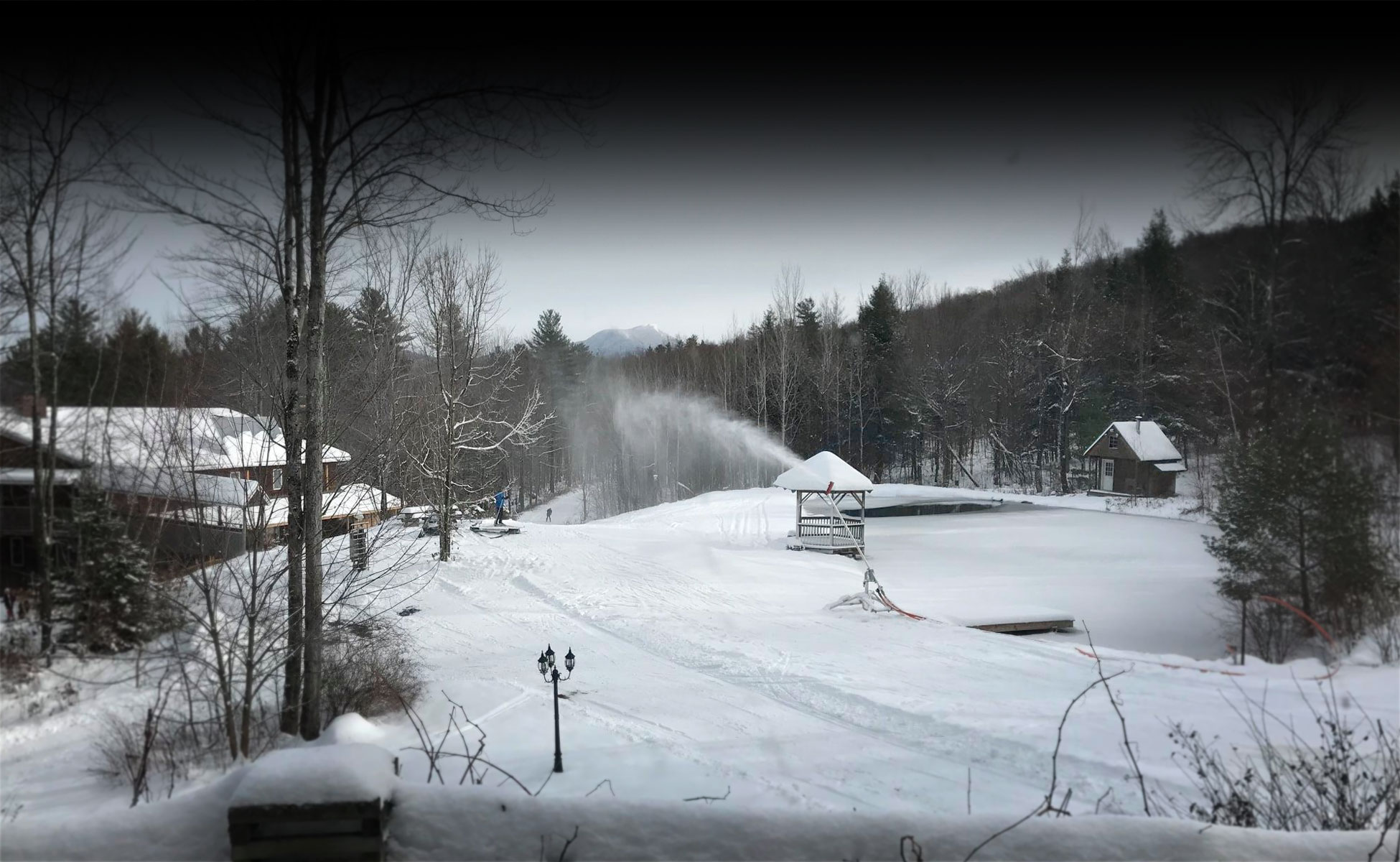 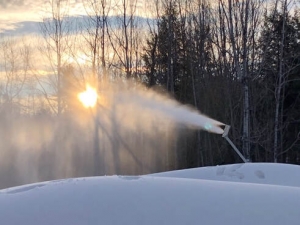 SNOWMAKING PROJECT:  We started snowmaking in the winter of 2012 to improve the skiing experience here at Sleepy Hollow (And because we like skiing, engineering, technology, and pumping water and air at high pressure).   The first year we had a 700 meter loop, then we added pipe and more snow guns in the following years to build up to a 1.2km loop (2014-2017).  Now we’re up to a 2km snowmaking loop (2018-)  Making snow is a lot like making maple syrup, actually, in that it’s addictive and hard to stop once you’ve started.  You always see ways to improve your operations, and you always want to upgrade your equipment and tools!
​
As of fall 2019 here is what we’ve got for a system:

When we started this project, there weren’t too many nordic areas doing it yet.  There was also a dearth of online information about making snow for nordic areas and the costs involved.  This description is here for those curious about snowmaking, and for those that are considering putting in their own systems and need some internet resources… Here is what we spent to make this project happen, so that other ski areas and enthusiasts can see what it takes to get started.    Here are the components and costs involved years 2012-2015.

Here are the components and costs involved year 2016 upgrades:

We’re essentially doubling our piping layout to make it easier to make snow (more convenient hydrants = less lugging snowmaking hose around!)… We’re doing this by taking all our metal air pipe and moving/changing it to water pipe.  We then bought DR11 black poly pipe that we’ll bury to make our compressed air lines.  We’re also burying some pipe that has been exposed until now for better freeze protection.

Here are the components and costs for our 2018 upgrades… We wanted to expand our snowmaking loop up to 2km (from 1.2)… We had to make both water storage improvements and extend our snowmaking lines.   We decided to add a second water storage pond about 200 meters from our current pond, and connect them via a 1.5″ water pipe.  We control the flow via a ball valve that we can close or open to the right flow.  We got the permitting by Oct. 20th, 2018, and had to hurry to build the pond before winter.  We used our 45 hp excavator, plus our tractor to dig the pond over a week.  We were expecting clay hardpan soil, but were surprised to find a seam of gravel in part of the pond area… As a result, we decided to line the pond with 6 mil poly plastic sheeting.  It only took 10 days to clear and dig the pond… Then we were worried our intermittent ditches wouldn’t fill the pond up in time… Then it rained really hard, and then we were worried the pond was filling too fast and might blow out the back pond berm (since it was recently excavated material it was more likely to blow out).   But all worked fine, and we had a full second pond by the start to the snowmaking season.

We also had to extend our snowmaking lines to cover the new loop additions…  We had to extend two lines with 5 hydrants sets each down Liberty Meadow (1000′) and Lower Saddle trail (1000′).  I also wanted to experiment and try out hdpe poly pipe for our high pressure water lines….  I liked the fact that I could use socket fusion to weld in the hydrant sets (instead of hiring a welder with metal pipe).  I also liked that the lifespan of the hdpe should be a lot longer as hdpe doesn’t rust.  There is some online information on using this with bigger diameter pipe (4″ and above at alpine areas), but we were only looking for 2″ pipe.  I did some research, and felt good enough about using 2″ dr7 black poly hdpe pipe.  It has a pressure rating of 335 psi (at 73 degrees).  Our water pressure gets up to 375 psi, but our water temp is always under 40 degrees… So it was a little bit of a risk to run that high pressure in these pipes, but I went for it… and it worked (at least so far…).  No blowouts yet… I’ll update if any do fail (Update:  No failures to report after the first year!).

Here are our costs:

Here are the components and costs for our 2019 upgrades… We had a few improvements we wanted to do in 2019… The first was to add a Ratnik H2 snow gun… This is a water only gun (so no compressed air is used).  The mast is 20′ long… In comparison our other snow guns have a 10′ mast.  The taller mast allows for greater hang time and dispersion…  The water needs to be cold to use this type of gun… Ours is cold as it comes from the top 2′ of our pond which makes it always in the mid to low 30’s.  I’ll update on how this new gun works after this season (Update:  Works great at 5 degrees or colder.  Snow is a little slushy using up to 15 degrees.  Leaves huge piles of snow on those really cold nights)… It will be used in our meadow as it should have a wide dispersal.  We made our own sled for it.  We also added in 700 feet of dr7 poly pipe for water and 500′ for air, as well as 10 more hydrant sets for easier set up times.   We also moved our 4th compressor from the pisten bully garage to the round barn basement…. We had problems with water condensation inside the air pipe as it left the pb garage.  Condensation kept flowing back downhill and freezing up next to the compressor.   Problem solved by moving the compressor.

DISCUSSION: We had several design options to consider, including whether to go with diesel powered air compressors, or electric.  We opted to go electric, as we’ll have the capability to offset a lot of our energy usage through net metering with our solar panels.  We also liked the air quality and lower sound benefits of going with electric.
​
We tend to move the guns around during the day, but then we let the snow pile up overnight (as we like our beauty sleep).  The next day (or in a few days if we can to let the snow whales drain and freeze) we push the snow around with our Pisten Bully.

Costs to operate the system have been actually lower than I expected… From $400 in electricity costs in 2012, to just over $1000 in 2015 (bigger loop).  Now in 2018 we used $2600 in electricity costs.  Most all this electricity is covered by our solar panels.   There are of course other costs like man hours, and machine hours to push and groom the snow.  Our system is definitely on the small side compared with alpine areas, and compared to other nordic areas like Craftsbury and Rikert nordic.  It takes a month and a half with decent weather to get our full 2km fully covered… Improvements in future years will include reducing the amount of time it takes to get a full loop covered.

Like many snowmaking operations, there is a lot to go wrong.  We have buried our own snowguns (when the wind shifts overnight, you can wake up to the sled of your gun under 3 or 4 feet of heavy wet snow).  I’ve then broken the sleds when trying to push it out with the pisten bully.  We’ve had frozen pipes… These often take a lot of time to diagnose where the freeze is, and then if it is fixable it takes a lot of time with a torch to unfreeze.   Sometimes the metal pipe bursts with frozen water (we lost a 130′ section of metal pipe with the entire pipe froze accidentally in 2017).   My favorite recent story (from 2018)…  I was trying to get past a snow whale on the snowmobile (big snow pile created when gun left running for 8+ hours in one place).  I got partially over the whale, slid off the side of the trail, and got the snowmobile stuck in a ditch… I goosed the throttle several times and spun the track of the snowmobile to try to get unstuck… I didn’t even realize I was directly over the air line when I did this, and sure enough the studded track of the snowmobile clawed right through the air line.  Compressed air started hissing out, and after a few swear words and an ill fated repair attempt, I had to shut down all 4 guns that night due to no air pressure.  The next day I was able to repair the section by splicing in a 2′ new pipe section.  Live and learn.
Another story from 2019… Dave accidentally hooked a snowmaking hose on the back of the snowmobile groomer… The hose pulled the water hydrant out of the 6″ metal pipe and a nice water geyser happened!  Luckily the hydrant broke off above the fitting, so we were able to get in there with a pipe wrench, remove the remaining hydrant section from the 6″ pipe, and thread in another water hydrant.  The whole repair took only about an hour. 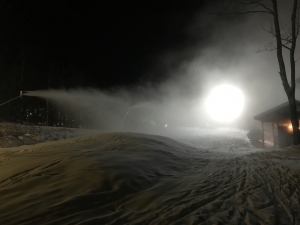